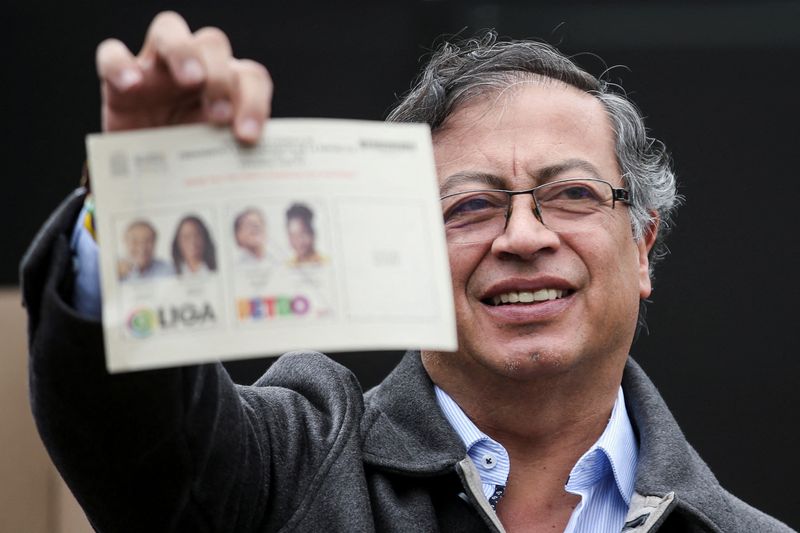 © Reuters. FILE PHOTO: Colombia's Gustavo Petro of the Historic Pact coalition shows his ballot before casting his vote at a polling station during the second round of the presidential election in Bogota, Colombia June 19, 2022. REUTERS/Luisa Gonzalez/File Photo

BOGOTA (Reuters) -The election of Colombia's first leftist president, Gustavo Petro, is indicative of widespread yearning for a more equal and inclusive society, analysts and business leaders said, but the former guerrilla will need to act fast to reassure investors.

The election of a former guerrilla marks a radical change for a country still scarred by decades of conflict and highlights the depth of frustration with the right-leaning political establishment accused of overseeing a wide gap between rich and poor.

Petro has pledged to fight inequality with free university education, pension reforms and high taxes on unproductive land in the Andean country, where nearly half the population lives in poverty.

His proposals - especially a ban on new oil projects for environmental reasons - have startled some investors, though he has promised to respect current contracts.This campaign was Petro's third presidential bid and his victory adds the Andean nation to a list of Latin American countries that have elected leftists in recent years.

Petro will take office at a time when Colombia is struggling with low credit ratings, a large trade deficit and national debt which is predicted to end the year at 56.5% of GDP.

Oil accounts for nearly half of exports and close to 10% of national income.

"Colombia was governed for so many years by the economic and political elite," said Gimena Sanchez-Garzoli, Andes Director for the think tank Washington Office on Latin America. "In many ways this election is basically the voice of most of the population in the country, especially the rural poor, women, Afro-Colombians, the indigenous."

"People didn't want a change at any cost, they wanted a change that would actually be with actual proposals which include making the peace accord a priority," said Sanchez-Garzoli referring to the 2016 peace deal with the Revolutionary Armed Forces of Colombia (FARC), which brought an end to that group's role in the nearly 60-year-old internal conflict.

Petro has pledged to fully implement the FARC accord - which detractors accuse current President Ivan Duque of failing to adequately support - and to seek talks with the still-active ELN rebels.

On Sunday night, as he celebrated his win, Petro told his supporters: "Peace is someone like me being able to be president."

Petro regularly praises the mostly young protesters who have taken to the streets over the last three years to decry inequality and police violence, in demonstrations where more than 40 people were killed.

The president-elect, who was arrested by the military in 1985 while carrying weapons for the M-19 rebels, has said he was tortured during his 16-month detention. His victory has high-ranking armed forces officials bracing for change.

"There's a segment of the population that is totally opposed to him because of his M-19 past," Kaplan said. "Maintaining security and protection of civilians will depend on good civil-military relations, and it's uncharted waters in that regard."

But Petro's proposals will face challenges, not least because of a deeply divided congress where a dozen parties hold seats.

"Petro is going to have a very strong opposition from day one, we're going to have a congress that all of a sudden is disjointed from the executive branch," said Colombia Risk Analysis founder Sergio Guzman.

"I think this means people's priorities have moved beyond the conflict," Guzman said. "This marks a really stark departure from where we've been as a country."

Business leaders and the market were awaiting ministerial appointments, especially for key positions like finance minister, and have predicted volatility in the peso and in bonds when trading opens on Tuesday after a holiday weekend.

Petro has floated some moderates as possible finance ministers, including Alejandro Gaviria, a centrist economist and former health minister, as well as ex-ministers like Rudolf Hommes and Jose Antonio Ocampo.

"In us, he can expect a constructive partner," he said.

Petro was emphatic that business and development had important roles to play under his government. He has pledged to strengthen agriculture, tourism and manufacturing.

"We are going to develop capitalism in Colombia," told supporters on Sunday. Development is needed to overcome the "feudalism" and "pre-modernity" from which Colombia still suffers, he said.