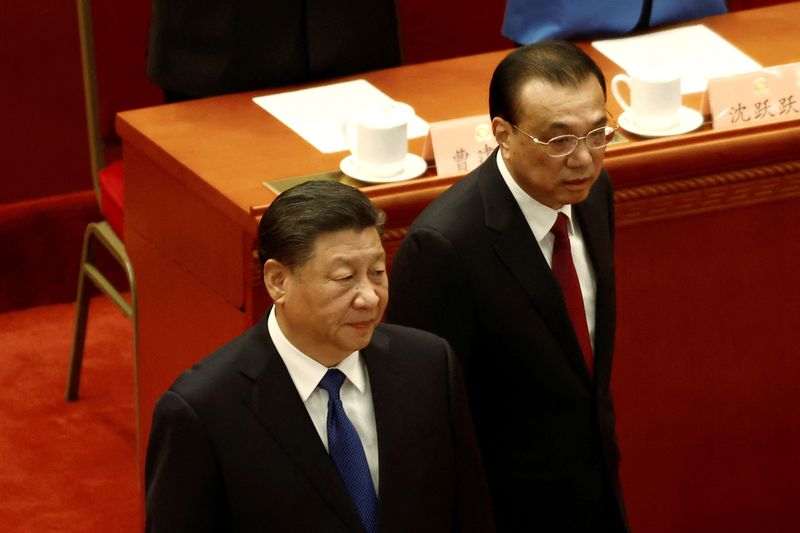 BEIJING (Reuters) - China's ruling Communist Party sets the stage next month for the biggest overhaul of its economic leadership in a decade, with a generation of reform-minded policymakers expected to step down amid worsening growth prospects.

Beijing's once-in-five years reshuffle begins at the party congress that starts Oct. 16, where President Xi Jinping is poised to break with precedent and secure a third leadership term.

While top government officials remain in posts until the annual parliament meeting, usually in March, expected the party conclave will offer clues on who is in line for top posts and identify who succeeds Li Keqiang, who steps down in March after two terms as premier, a position tasked with managing the world's No.2 economy.

Li is widely perceived to have seen his role diminished under Xi but has nonetheless been a source of comfort to investors who view him as a moderate voice amid Xi's shift towards state-driven economic management.

"Li's power has been limited but at least he was appointed at the same time as Xi. His successor could be even weaker," said a policy insider who spoke on condition of anonymity, given the sensitivity of the matter.

"Under the existing political structure, whoever takes over (as premier) will not make a big difference," the person said.

In addition to Li, 70-year-old economic czar Liu He and top banking regulator Guo Shuqing, 66, are also likely to step down early next year, policy sources said, with Xi, 69, expected to maintain retirement age norms for leaders other than himself.

Li, 67, has a doctorate in economics from the elite Peking University and speaks fluent English.

Liu, a vice premier and Harvard-trained economist, is a close confidant of Xi and his point man in trade talks with Washington. He is seen as the brains behind earlier reforms, including painful efforts to reduce excess factory capacity and financial risks.

China's next economic team, by contrast, may be dominated by domestically groomed Xi loyalists who lack the international savvy, academic polish and independent-mindedness of the current team, policy insiders and analysts say.

While both Wang and Hu served stints leading the economic powerhouse of Guangdong province and are seen as pragmatic, pro-reform officials, their capacity to make major changes could be limited, policy insiders said.

Other longer-shot possibilities for premier include Chongqing party boss Chen Miner and his Shanghai counterpart Li Qiang, they said. Both are considered Xi loyalists.

He Lifeng, who heads the National Development and Reform Commission, the powerful state planning agency, is a leading candidate to replace Liu, policy insiders said. An economist and bureaucrat with close Xi ties, He worked for 25 years in Fujian province.

"The 20th Party Congress has plenty of room for choosing a new economic team," said Bert Hofman, director of the East Asian Institute at the Lee Kuan Yew School of Public Policy in Singapore.

"If that team is a technocratic one that pursues a pragmatic agenda to achieve the broad goals outlined by Xi, we can see much of the unfinished reform agenda of the 2013 decisions resurface again, and hopefully see growth reignited," said Hofman, former country director for China at the World Bank.

"If, on the other hand, the new team reflects a more statist approach, growth may continue to drag."

The new economic team will inherit unprecedented challenges, from finding an exit from what many see as an increasingly unsustainable zero-COVID policy to a property crisis threatening financial stability and rising tensions with Washington.

A chaotic clampdown on tech firms and private education, which shattered investor and business confidence, prompted Li and Liu to voice support for the so-called platform economy.

"In the face of mounting internal and external challenges, the Chinese government's attention seems to have been drawn away from its reform agenda," said Joerg Wuttke, president of the EU Chamber of Commerce in China. The chamber plans to issue a paper making nearly 1,000 recommendations for improving conditions for European firms in China, ahead of the congress.

"The Chamber believes the best way for China to fulfil its economic potential is by getting back to the path of reform and opening," he said.

With few signs China will significantly ease zero-COVID soon, some analysts expect the economy to grow by just 3% this year, which would be the slowest since 1976, excluding the 2.2% expansion during the initial COVID hit in 2020.

Li, who has fought an uphill battle to keep the economy on an even keel while pushing limited changes, appears keen to leave his mark on the public memory as a reformer.

During a visit to Shenzhen, a village-turned-megacity and the symbolic birthplace of reforms that unleashed four decades of breakneck growth, Li said that trend is irreversible.

"China's reform and opening-up will continue to move on. The Yellow River and Yangtze River will not flow backward," he said at Shenzhen's Yantian Port last month.

A video of the remarks posted on social media was later removed.