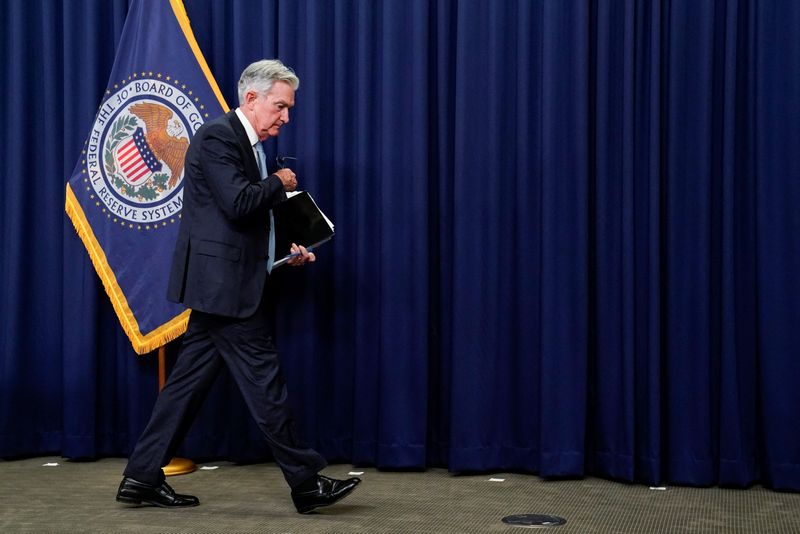 (Reuters) - Federal Reserve policymakers are less confident than at any time since the height of the pandemic about what will happen with the economy, data published alongside their forecasts and the Fed's hefty three-quarters-of-a-point rate hike this week show.

The last time they were this worried they could be underestimating the coming deterioration in the labor market was in the depths of the Great Recession. But they are even more worried they are overestimating a hoped-for decline in inflation, documents https://www.federalreserve.gov/monetarypolicy/fomcprojtabl20220615.htm charting confidence and risks seen in their forecasts show.

The data helps underscore why policymakers are so focused on raising interest rates fast even if doing so causes a bigger dent to growth and unemployment than previously hoped, and why it is clarity on the inflation outlook that will drive policy.

"It is clear that path of inflation continues to be the key consideration in how quickly the Fed gets to, and how far it moves past, the range of neutral in order to bring inflation down 'clearly and convincingly,'" wrote Morgan Stanley (NYSE:MS) economists, referring to the standard Fed Chair Jerome Powell has set for declaring victory on price pressures and slowing up on rate hikes.

All 18 Fed policymakers are more-than-usually uncertain about their inflation and economic growth forecasts, and all but one note the same about their unemployment rate projections, the data shows. The same documents also show that no policymaker believes their forecasts are too pessimistic, and most believe they could be underestimating the risks.

That means that though Fed forecasts embody the "softish" landing to which they aspire - inflation dropping to 2.2% by 2024, with the economy motoring along at 1.9% and unemployment rising just half a point to 4.1% - they are worried things could be worse, particularly for inflation.

It also means, as with this week's last-minute decision to deliver a hefty 75 basis point move after worse-than-expected inflation readings, that what Powell calls this "extraordinarily challenging and uncertain time" is sure to leave investors hanging.

Unquestionably, interest rates will rise, and rise fast: 17 of the 18 Fed policymakers see the target rate at least at 3.6% by next year, two full percentage points higher than today, and five see it above 4%.

But is that where they will end up? Not even Fed Chair Powell knows. "I think we'll know when we get there," Powell told reporters Wednesday.

"With the FOMC looking to remain nimble amid heightened uncertainty, guidance set out by communications should not be regarded as written in stone," Barclays (LON:BARC) economists said in a note to clients following the this week's Federal Open Market Committee meeting.

It's a warning that investors may need to keep in mind as Powell's colleagues start Friday to make their first public statements after this week's policy meeting, and when Powell gives testimony next week before lawmakers on Capitol Hill.