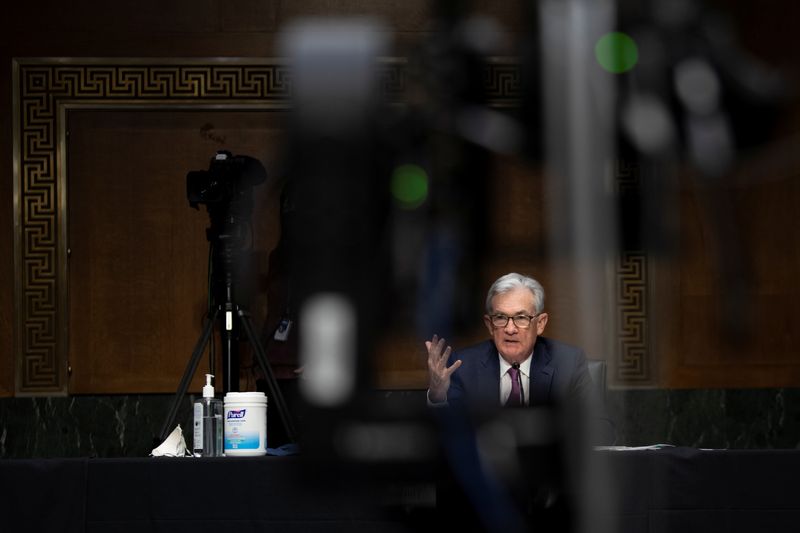 (Reuters) - Federal Reserve Chair Jerome Powell gave investors a glimmer of hope that the central bank is unlikely to become more hawkish in coming months, though few see reason for long-term optimism in the face of soaring inflation and fears of slowing growth.

The Fed delivered an expected 50 basis point interest rate increase on Wednesday, but said larger hikes were not on the table among policymakers, allaying some investors’ fears that the central bank would raise rates by 75 basis points in upcoming meetings.

The coming weeks will show if markets take the Fed at its word. Plenty of factors could force the Fed into a more aggressive posture, and some investors continue to believe policymakers were initially too slow in reacting to surging inflation and will need to raise rates more than expected.

Still, Powell’s message appeared to fuel the hopes of investors who believe markets may have already priced in the extent of Fed hawkishness for now. The S&P 500 roared to a 2.8% gain on Wednesday, its biggest since May 2020, while Treasuries also rallied.

“I think the pain is mostly behind us,” said Brian Jacobsen, a senior investment strategist at Allspring Global. Powell “took 75 bps off the table and already talked up how core inflation is looking better, which could lower the path of rate hikes.”

Expectations of a hawkish Fed have weighed heavily on markets this year. The S&P is down 10.7% from its highs following an 8.8% drop in April, the worst monthly decline since March 2020. The ICE (NYSE:ICE) BoFA US Treasury Index is down 8.2% to its lowest level since May 2019. The Fed raised rates by 25 basis points in March, its first hike since 2018, and the market is pricing in some 191 basis points of tightening for the year.

Some market participants believe Powell’s comments – which envisaged 50-basis-point hikes each in June and July, potentially the steepest increases in the Fed funds rate since 1994 – showed the Fed has grown as hawkish as it's likely to get for the time being.

“At this stage, we believe the Fed has pivoted to an appropriately hawkish stance and is likely done surprising markets for a while. We recommend focusing more on the data flow going forward, especially around labor and inflation,” analysts at BoFA Global Research wrote.

Investors will get a look at April inflation data next week; the March numbers showed consumer prices growing at their fastest clip in nearly four decades. Signs that inflation is continuing to exceed market expectations could erode confidence in the Fed’s outlook and weaken asset prices.

"Of course, whether today ultimately marks the 'peak hawkishness' moment... depends on the data, particularly the inflation data," wrote analysts at Natwest including Brian Daingerfield.

For bulls, history may offer some hope, according to data from Ryan Detrick, chief market strategist for LPL Financial (NASDAQ:LPLA). The S&P 500 has rallied back in 12 of the 21 instances since 1980 when it fell by double-digits in a single year, ending those years with a hefty average gain of 17%, the data showed.

Some, however, saw few reasons for optimism, as markets still face issues including geopolitical uncertainty and sky-high commodity prices stemming from the war in Ukraine.

“At least for today investors had a reason to come back to some parts of the equity market, but you haven’t really solved any issues that are plaguing markets,” said Sameer Samana, senior global market strategist at Wells Fargo (NYSE:WFC) Investment Institute. “All Powell really did was take extreme measures off the table for now.”

And although Powell said he was confident the Fed could tame inflation without pushing the economy into recession, some investors remained doubtful the central bank could engineer a so-called soft landing.

“They’ve started too late in addressing inflation and we all know this, and the question is whether they will make a mistake the other way,” said Eddy Vataru, lead portfolio manager for the Osterweis Total Return Fund, which has its largest overweights in mortgages and corporate bonds.

“Today’s market reaction is one of relief," he said, "but tomorrow’s could be different once we move past the idea that the worst possible decision is off the table.”